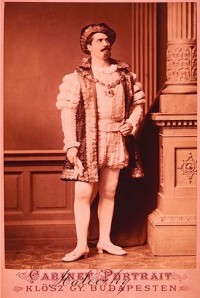 He received his vocal training in Munich. After his first appearances there and in Paris, he was referred to the Budapest Court Opera in 1872 by the famous conductor Hans Richter, with whom he was friends. He remained a member of this opera house until 1888 and continued to appear as a guest there later. Among the roles he sang at the Budapest Opera are Count Luna in “Troubadour”, Renato in “Un Ballo in maschera” by Verdi, Alfonso in Donizetti’s “La Favorita” and Valentin in “Faust” by Gounod to highlight. He was married to the opera singer and teacher Jozsepha Ellinger(1852-1920), daughter of the famous Hungarian Hero tenorsJozsef Ellinger (1820-1891) and the Soprano Teresa Engst (1824-1898); the daughter, came from the marriage of Vilmos Maleczky and Józsefa Ellinger Bianca Maleczky (1882-1946) and the son Oszkar Maleczky(1894-1972), both of whom had great singing careers. 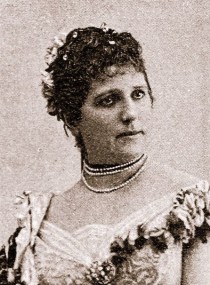 She was the daughter of the famous Hungarian tenor Jozsef Ellinger(1820-91) and the soprano Teresa Ellinger-Engst. She received her education from her parents, especially her father, and made her debut in Budapest in 1872 in a concert conducted by the great Franz Liszt. From 1874 until 1885 she was a member of the Budapest Volksoper, then for several years the Budapest Court Opera. The focus of her repertoire was on the major roles in the operas by Mozart and Wagner as well as in the operas of the Hungarian composer Fernec Erkel und A.F. Doppler. Among other things, she also sang under the direction of Gustav Mahler, who was royal opera director of the Budapest Opera from 1888 to 1891. Since 1892 she was a much sought-after teacher at the National Music Academy in Budapest. She was married to the baritoneVilmos Maleczky (1845-1924), who also held a leading position at the Budapest Opera. From this marriage came a daughter, Bianca Maleczky (1889-1946), also an esteemed singer on the Hungarian stage, and a son, Oszkar Maleczky (1894-1972), who had a great career at the Budapest National Opera. 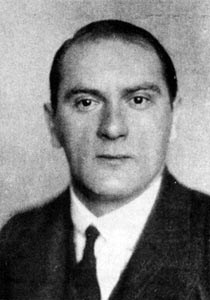 His family played a major role in the historical development of opera in Hungary. His maternal grandfather József Ellinger (1820-91) was the first tenor at the Budapest Opera for many years, where he created the title role in the world premiere of the opera “Bank Ban” by F.Erkel on 9 March 1861. His father Vilmos Maleczky (1845-1924) was a baritone, his mother Jozsefa Maleczky-Ellinger (1852-1920) coloratura soprano at the Budapest Opera, and his sister Bianca Maleczky became a well-known singer. Oszkar Maleczky began his career in 1925 at the Budapest City Theater. In 1928 he was appointed to the Budapest National Opera, where he developed a long and illustrious career. His interpretation of the title characters in Puccini’s “Gianni Schicchi”, his Papageno in “The Magic Flute”, his Fra Melitone in Verdi’s “La forza del destino” and his “Don Pasquale” by Donizetti were appreciated. He also sang roles such as Pizarro in “Fidelio”, Telramund in “Lohengrin”, Alberich in “Ring der Nibelungen” and, as a special highlight, Beckmesser in “Meistersingern”. He also sang the latter role under the direction of Otto Klemperer, who was musical director of the Budapest State Opera from 1947 to 1950. On April 24, 1932, for example, he took part in the premiere of Zoltan Kodaly’s “The spinning room” at the Budapest Opera. Until his stage farewell in 1962, he worked at the Budapest National Opera. He also made a great contribution as a singing teacher and worked as such for many years at the Budapest Academy of Music. He received the title of Hungarian National Artist and was awarded the Kossuth Prize. His voice has been preserved on a number of Hungaroton recordings, including the complete operas “Fidelio”, “Meistersinger”, “Manon Lescaut” by Puccini and “Hary Janos” by Kodaly.

He continues the opera tradition of the Maleczky family. He received his education at the Conservatory of the City of Vienna and at the Vienna University of Music. He was a member of the ensemble of the Vienna Volksoper for several years and has sung numerous operas and, as a Viennese, of course, many operetta roles. His star roles include Tamino in “The Magic Flute”, Alfredo from “La Traviata”, but also Sandor Barinkay in “Gypsy Baron”. In recent years his voice has developed into what is known as the “youth hero tenor subject”. The future will certainly bring a Max in “Freischütz”, a Florestan in “Fidelio” and also some Wagner roles.

This site is registered on wpml.org as a development site.